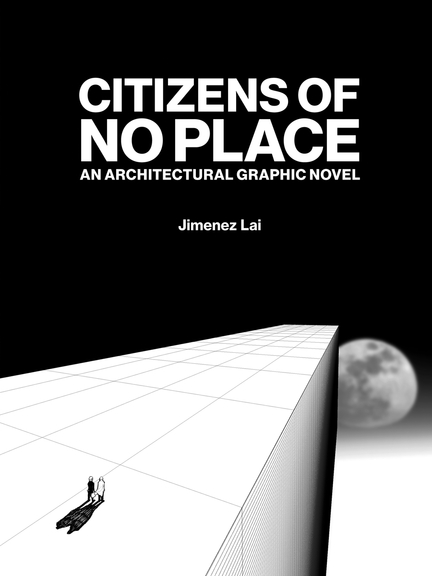 Citizens of No Place by Jimenez Lai

Cover of Citizens of No Place, an architectural graphic nove

An exquisite corpse drawing conversation with Jimenez Lai, Brett Littman, Johanna Meyer-Grohbrügge and Michael Young on the occasion of the launch of Citizens of No Place, an architectural graphic novel by Jimenez Lai.

Within the framework of Storefront’s exhibition Aesthetics/Anesthetics,  Storefront for Art and Architecture presented Performing Representations, a one-day event involving seminal figures in the discourse and practice of drawing and architecture to discuss the role of representation within contemporary contexts. The event unfolded through the construction of a continuou s drawing by the participants at the event.

About Citizens of No Place

Architecture has become an increasingly interdisciplinary profession, and the language with which architects envision and articulate their ideas has radically diversified in recent years. Architect Jimenez Lai has pioneered an unexpected and wholly unique approach that moves beyond contemporary architectural renderings and models. Citizens of No Place is a groundbreaking graphic novel on architecture and urbanism. Inspired by the theoretical drawings of paper architects, Lai uses manga-style storyboards to explore the role of fantasy and storytelling in architecture, and in the process ushers in the next generation of theory and criticism. A key reference for representational techniques, Citizens of No Place showcases provocative design examples for architecture studio courses at all levels.

Copies are available for purchase on Storefront’s website here.

Jimenez Lai  is an Assistant Professor at University of Illinois at Chicago and Leader of Chicago-based architectural office Bureau Spectacular. He graduated with a Master of Architecture from University of Toronto. Previously, Lai has lived and worked in a desert shelter at Taliesin and resided in a shipping container at Atelier Van Lieshout on the piers of Rotterdam. Before founding Bureau Spectacular, Lai worked for MOS, AVL, REX, and OMA/Rem Koolhaas in Toronto, Rotterdam, and New York. In the past years, Lai has built numerous installations as well as being widely exhibited and published around the world. His first manifesto, Citizens of No Place, was published by Princeton Architectural Press with a grant from the Graham Foundation. Draft II of this book has been archived at the New Museum as a part of the show Younger Than Jesus. In 2012, Jimenez Lai has been named a winner to the Architectural League Prize for Young Architects

Since May 2007, Brett Littman has been the Executive Director of The Drawing Center, based in New York.  Previously he was the Deputy Director at MOMA P.S.1 from 2003 – 2007 and was Managing Director of  wps1.org  (now  artonair.org ) from 2003 – 2004.  From 2001 – 2003, he was the Co-Executive Director of Dieu Donné Papermill in SoHo, New York and from 1995 – 2001 he was the Associate Director of UrbanGlass in Brooklyn, New York. Littman is also an active art, craft, architecture and design critic, is a member of AICA/USA (International Art Critic Association) and has written numerous catalog essays and articles for a wide variety of international publications and museums. He has lectured extensively on art, design, craft, and the history of the alternative space movement in New York. Littman has curated for the Drawing Center: Yüksel Arslan: Visual Interpretations; Greta Magnuson Grossman: Furniture and Lighting; and Leon Golub: Live & Die Like a Lion? which won the 2010 AICA Award for Best Show in Non-Profit Gallery; Drawing and its Double: Selections from the Istituto Nazionale per la Grafica, Rome. Future projects include Sean Scully: Change and Horizontals (2012 – 2013) co-curated with Joanna Kleinberg and traveling to four European venues before opening at The Drawing Center in September 2013, and Guillermo Kuitca: Diarios (2012).  As well, Littman curated Eugene Von Bruenchenhein for the American Folk Art Museum, New York (2010 – 2011) and will curate the drawings component of Mariko Mori’s retrospective at the Japan Society in 2013.

Johanna Meyer-Grohbrügge  is an architect from Germany who lives and works in Berlin and New York. Johanna graduated from the ETH Zürich and is currently teaching studios at the Dessau institute of Architecture and the Graduate school of Architecture, Planning and Preservation at Columbia University . Together with Sam Chermayeff she founded the office June14 Meyer-Grohbrügge & Chermayeff, after working for SANAA in Tokyo for five years.  June 14 Meyer-Grohbrügge&Chermayeff began with a desire to make things, places and atmospheres for people. The office and work aims to have people relate to architecture, for architecture to relate to people and for people to relate to themselves. June 14 searches for an understanding of different ways of living and working in the contemporary world. The work stems from a belief that architecture can make things happen and that things can happen to architecture. On a practical level, the principals have experience with a wide range of projects from small gardens and bespoke furniture to office towers. The office’s intention is to expand that range while maintaining a dynamic understanding of the human scale. The office is based in Berlin and New York.

Michael Young  is an architect and educator practicing in New York City where he is a founding partner of the architectural design practice Young & Ayata. Their design work and research has been exhibited nationally and internationally. Michael received a MArch from Princeton University in 2005 and BArch from Cal Poly San Luis Obispo in 1997. currently teaches studios and seminars at The Cooper Union, Yale University, Columbia University, and Princeton University. His drawings have been exhibited recently in New York, Los Angeles, and Lexington, Kentucky and are featured as part of the Drawing Center’s Viewing Program. In addition to teaching & practicing, Young is invested in writing, research and experimentation on issues concerning aesthetics and architectural mediation

Storefront for Art and Architecture’s event series is generously supported by The Andy Warhol Foundation for the Visual Arts.