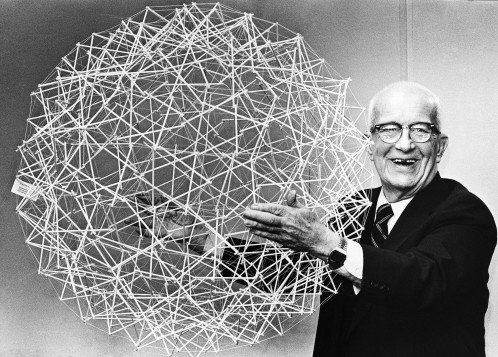 With Mark Wigley and Andrés Jaque

We live in radio. The real architecture of our world is that of electromagnetic frequencies. We are constantly being reshaped by countless overlapping waves that pulse through our buildings and bodies, yet we don’t really know what this means.

Radio Redux brings together Andres Jaque and Mark Wigley to discuss invisible architecture in the context of Wigley’s new book, Buckminster Fuller Inc.: Architecture in the Age of Radio (published by Lars Muller, 2015). Fuller will be present in voice and spirit, with recordings that reflect his obsessive, eccentric brilliance. 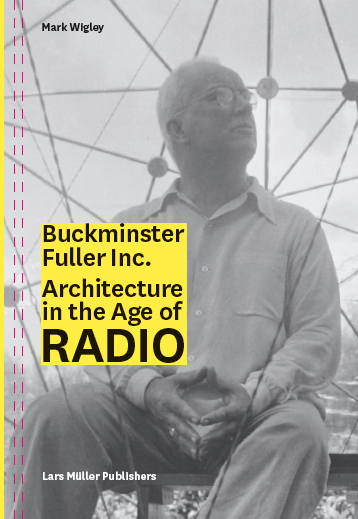 Buckminster Fuller Inc.: Architecture in the Age of Radio, is an intellectual biography that rethinks the legacy of one of the key protagonists of the twentieth century. It shows that Buckminster Fuller, as a unique amalgam of theorist, designer, and performance artist, was devoted completely to the architecture of radio. The book draws extensively on Fuller’s archive to follow his thinking from toilets to telepathy, plastics to prosthetics, nanostructures to networks, and deep data to deep space. It shows that the critical arguments and material techniques of arguably the single most exposed designer of the last century were too radical to be grasped at the time, but have become urgently relevant today. In Bucky Inc., Fuller serves as a crucial reference point in trying to understand and engage our increasingly electronic world.

Copies of Buckminster Fuller Inc.: Architecture in the Age of Radio will be available for purchase at the event.

Mark Wigley is a Professor of Architecture and Dean Emeritus of Columbia University’s Graduate School of Architecture, Planning and Preservation. He is a historian and theorist who explores the intersection of architecture, art, philosophy, culture, and technology. His books include: Derrida’s Haunt: The Architecture of Deconstruction; White Walls, Designer Dresses: The Fashioning of Modern Architecture; Constant’s New Babylon: The Hyper-Architecture of Desire; and Buckminster Fuller Inc. – Architecture in the Age of Radio. He has curated exhibitions at the Museum of Modern Art and The Drawing Center in New York, the Witte de With in Rotterdam, and the Canadian Center for Architecture in Montreal. He was born in New Zealand, trained there as an architect then as a scholar, and is now based in New York. He is currently co-curating the Istanbul Design Biennial 2016 with Beatriz Colomina on the question ARE WE HUMAN?

Andrés Jaque, PhD Architect (ETSAM) and Alfred Toepfer Stiftung’s Tessenow Stipendiat, is a Professor of Advanced Architectural Design at the Columbia University GSAPP and a Visiting Professor at Princeton University School of Architecture.

He is the founder of the Office for Political Innovation, that has completed many renowned projects such as “TUPPER HOME,” “Plasencia Clergy House,” “House in Never Never Land,” “ESCARAVOX,” and “COSMO MoMA PS1.” They have been awarded the Frederick Kiesler Prize, the SILVER LION for Best Research Project at the 14th Venice Biennale, the Dionisio Hernández Gil Award, London Design Museum’s “Designs of the Year” Selection, and Architectural Record’s “Designers of the Year.” The office’s project “IKEA Disobedients” is the first architectural performance ever included in the collection of the Museum of Modern Art, and it is part of a series of architectural experiments intended to explore design from the perspective of post-foundational politics.

Richard Buckminster Fuller was born on July 12, 1895, in Milton, Massachusetts. After spending most of his youth in Massachusetts and on Bear Island in Maine, he matriculated at Harvard University in 1913, only to be dismissed shortly after. From 1917-1919, Fuller served in the US Navy during World War I. In 1917, he married Anne Hewlett, the daughter of a prominent New York architect, and, after leaving the Navy, spent five years working with his father-in-law on new techniques of housing construction.

From 1927 onward, he became independent and committed himself to completely rethinking the question of shelter—relentlessly challenging every assumption about structure, function, materials, technology, aesthetics, services, distribution, mobility, communication, collaboration, information, recycling, politics, property, and social norms. He started from first principles to develop a radical philosophy. The purpose was to create a much more efficient and equitable distribution of planetary resources to enable the survival and ongoing evolution of the human species. His work paralleled, radicalized, and critiqued the mainstreams of modern architecture, and it still defies categorization today. He was a teacher and communicator who worked across the globe in every possible medium, becoming probably the single most exposed designer and design theorist of the twentieth century. He died in Los Angeles on July 1, 1983 at the bedside of his wife, who died thirty-six hours later.

Eva Franch is a New York based architect, curator, educator, and lecturer of experimental forms of art and architectural practice. In 2004, she founded a solo practice called OOAA (Office of Architectural Affairs) and since 2010, has been the Chief Curator and Executive Director of Storefront for Art and Architecture. In 2014 Franch was selected by the US State Department with a project called OfficeUS to represent the United States Pavilion at the 14th Venice Architecture Biennale. Franch has taught at Columbia University GSAPP, the IUAV University of Venice, SUNY Buffalo, and Rice University School of Architecture.

Lars Müller, born in Oslo in 1955 and a Norwegian citizen, has been based in Switzerland since 1963. After becoming a graphic designer in Zurich, extended traveling, and a one-year assistant position with designer Wim Crouwel in Amsterdam, Müller established his studio in Baden/Switzerland in 1982. In 1983 Müller published his first book. As Lars Müller Publishers, he has produced some 600 titles to date.

Lars Müller is a passionate educator and has taught at universities in Switzerland and throughout Europe. Since 2009, he has been a guest lecturer at Harvard University’s Graduate School of Design. Müller frequently serves on academic and competition juries, and is currently a member of the steering board of Design Preis Schweiz. From 2013 to 2015, Müller was the international president of AGI Alliance Graphique Internationale.