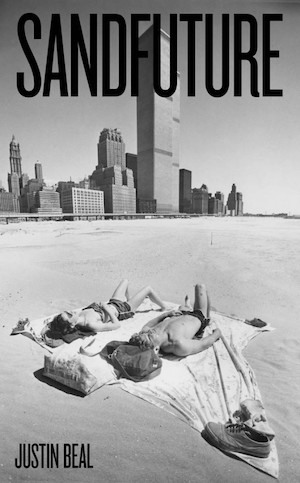 On the occasion of the launch of Sandfuture by Justin Beal

Please note that in accordance with New York State regulations, proof of vaccination will be required to enter the gallery space.

Architect Minoru Yamasaki (1912–1986) remains on the margins of history despite the enormous influence of his work on American architecture and society. That Yamasaki’s most famous projects—the Pruitt-Igoe apartments in St. Louis and the original World Trade Center in New York—were both destroyed on national television, thirty years apart, makes his relative obscurity all the more remarkable.

Sandfuture by Justin Beal is a work of literary non-fiction that recounts the life and work of Minoru Yamasaki, told through the eyes of a contemporary artist who considers how objects gain meaning and how (and for whom) architectural history is written.

New York City changes drastically after a decade bracketed by terrorism and natural disaster. From the central thread of Yamasaki’s life, Sandfuture spirals outward to include reflections on a wide range of subjects, from the figure of the architect in literature and film and transformations in the contemporary art market to the perils of sick buildings and the broader social and political implications of how, and for whom, cities are built.

Join us for an event with artist and author Justin Beal, in conversation with scholar Felicity Scott, to celebrate the launch of the book. This event is free and open to the public. RSVPs are encouraged.

Justin Beal is an artist with an extensive exhibition history in the United States and Europe. He graduated from Yale University with a degree in architecture and continued his studies at the Whitney Independent Study Program and the University of Southern California. His work has been reviewed in the New York Times, the New Yorker, Artforum, Frieze, Art in America, and the Los Angeles Times and is included in the permanent collections of the Albright Knox Museum, the Hammer Museum, and the Museum of Contemporary Art Los Angeles. Beal teaches at Hunter College. Sandfuture is his first book.

Felicity D. Scott is Professor of Architecture, Director of the PhD program in Architecture (History and Theory), and Co-Director of the program in Critical, Curatorial and Conceptual Practices in Architecture (CCCP) at the Graduate School of Architecture, Planning and Preservation, Columbia University. Her work as a historian and theorist focuses on articulating genealogies of political and theoretical engagement with questions of techno-scientific, environmental, and geopolitical transformation within modern and contemporary architecture, art, and media, as well as upon the discourses, institutions and social movements that have shaped and defined these disciplines, sometimes evidently, sometimes less so.