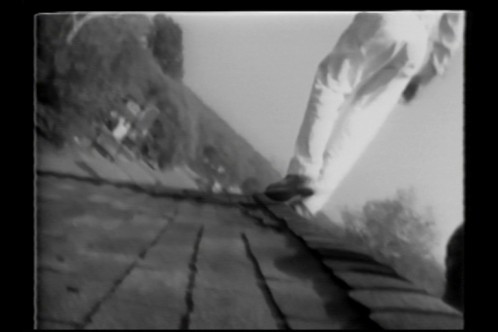 Gordon Matta-Clark walking along the ridgepole of the Humphrey Street House, Englewood, New Jersey. Still from footage of a bus trip to see Splitting, 1974. PHCON2003:0005:070. Collection Canadian Centre for Architecture. Gift of Estate of Gordon Matta-Clark.

Screening Series: Visiting Splitting was a film screening and discussion with Kelly Baum, Liza Béar, Jessamyn Fiore, GH Hovagimyan, Mark Wigley and Marcelo López-Dinardi. The event included a screening of Gordon Matta-Clark’s renowned Splitting as well as the film Visit to Humphrey Street, which had never been presented publicly and has no declared author.

In 1974, artist Gordon Matta-Clark explicitly asked the gallerist Holly Solomon for a house. He was in the search of a place for his next building cut. The Solomons offered him a house that was later known under the name Splitting, and later become one of Matta-Clark’s canonical works. The film Visit to Humphrey Street House (34:59) ––which has never been presented publicly and has no declared author–– records the famous bus trip that Solomon organized to take a group of artists to visit the house located at the 322 of Humphrey Street in Englewood, New Jersey.


About the participants
Kelly Baum
Kelly Baum has been working as a curator and scholar for almost fifteen years. Prior to her arrival at Princeton in 2008, she held curatorial positions at the Museum of Fine Arts, Houston, and the Blanton Museum of Art at the University of Texas at Austin. Kelly has organized several exhibitions, including Carol Bove; Jedediah Caesar; The Sirens’ Song; Transactions; Nobody’s Property: Art, Land, Space, 2000–2010; Doug Aitken: migration (empire); Felix Gonzalez-Torres: “Untitled”; and New Jersey as Non-Site, for which she received a Warhol Curatorial Research Fellowship. Kelly also has published dozens of essays on subjects ranging from Ana Mendieta and Santiago Sierra to Michèle Bernstein and the Situationist International in such journals as October, Art Journal, TDR: The Drama Review, and the Princeton University Art Museum’s Record. In addition to overseeing the museum’s Sarah Lee Elson, Class of 1984, International Artist in Residence Program and serving as a curatorial adviser to the University’s campus art committee, she is currently researching the exhibition Beckett’s Decade, to open in spring 2017.
Jessamyn Fiore
Jessamyn Fiore is a New York based independent curator and writer. She was the Director of Thisisnotashop, a not for profit gallery space in Dublin, Ireland, from 2007-2010. She co-founded The Writing Workshop in 2007 with Jessica Foley, which functioned as a collaborative forum for writers and artists. Fiore is co-director of the Estate of Gordon Matta-Clark with her mother, Jane Crawford, Matta-Clark’s widow. She curated 112 Greene Street: The Early Years (1970–1974) at David Zwirner in New York (2011), which led to the critically acclaimed, eponymous catalogue, published by David Zwirner and Radius Books (2012). She curated a second exhibition for David Zwirner in New York titled Gordon Matta-Clark: Above and Below(2013). Currently she has curated two exhibitions both on now: a solo exhibition by Clive Murphy titled Post Neo Proto Demoat Magnan Metz Gallery in Chelsea, New York until April 12 and The Balloon, a group exhibition inspired by Donald Barthelme’s short story “The Balloon” including the work of six artists from New York, Iceland, and Ireland and featuring Gordon Matta-Clark’s “Sky Hook/Drawing for a Balloon Building” series, at Rawson Projects in Greenpoint, Brooklyn until March 23rd. Her original one-act play Blast from The Past, based on the writings of Robert Smithson and Gordon Matta-Clark, is soon to be published by the Bureau for Open Culture.
GH  Hovagimyan
GH Hovagimyan is an experimental artist working in a variety of forms. An Internet and new media pioneer, his works ranges from hypertext works to digital performance art, interactive installations and HD video.
His works have been exhibited at MoMA, Mass MoCA, The Whitney Museum, The New Museum, The Walker Art Center, Jeu De Paume, MAC Marseille, MAC Lyon, Pompidou Center, Lincoln Center, ICA The Clocktower, The Kitchen, The Alternative Museum, Eyebeam Art & Technology, List Visual Arts Center, La Gaite Du Lyrique, Stuttgart Kunstverein, Steim Institute, the Moscow Center for Contemporary Art, Postmasters Gallery, Pace Digital Gallery
He has also exhibited works in major festivals and art fairs including; Art Basel Miami, Pulse Miami, Art Cologne, Split Film Festival, Conflux Festival, Video Dumbo, Scope Art Fair, Frieze Art Fair, Avignon Numerique, The Documenta, Interferences 2nd International Festival of Urban Multimedia Arts, Les Musiques, Marseille and Prix Ars Electronica 98 where he won an award for his collaborative work with Peter Sinclair.

Liza Béar
Since the mid 1970s Liza Bear has created an intriguing body of work that consistently focuses attention on communications issues-specifically the use of media by the press and the disempowered role of the public in communications policy. Central to Bear’s work is a desire to tie the means of production (technology) to the reasons for production (capitalistic advantage, national ideology, etc.). While Bear’s concerns are global, her approach is always personal and experimental-collapsing the norms of narrative and documentary, subjective authorship and objective document.
Mark Wigley
An accomplished scholar and design teacher, Mark Wigley has written extensively on the theory and practice of architecture and is the author of Constant’s New Babylon: The Hyper-Architecture of Desire (1998); White Walls, Designer Dresses: The Fashioning of Modern Architecture (1995); and The Architecture of Deconstruction: Derrida’s Haunt (1993). He co-edited The Activist Drawing: Retracing Situationalist Architectures from Constant’s New Babylon to Beyond (2001). Wigley has served as curator for widely attended exhibitions at the Museum of Modern Art, New York; The Drawing Center, New York; Canadian Centre for Architecture, Montreal; and Witte de With Museum, Rotterdam. He received both his Bachelor of Architecture (1979) and his Ph.D. (1987) from the University of Auckland, New Zealand.
Marcelo López-Dinardi
A researcher, educator and trained architect, studied his first year of architecture in his native Chile, and obtained his BArch from the School of Architecture of the Polytechnic University of Puerto Rico (PUPR), Cum Laude. Co-founded the research group CIUDADLAB in 2004, has been Assistant Professor of design studio, research and representation at the PUPR, where he directed the 2009-2010 Lectures Series Sense Recession: What Comes Next?, and also directed the Roundtable Series for four years. From 2008-2011 edited the journal Polimorfo, which he also co-founded. Has written for Entorno, Domus, Planning Perspectives, CCGSAPP, invited juror at the UPR, GSAPP, Barnard + Columbia College, Pratt Institute, Parsons, and NJIT, lectured at Cooper Union, exhibited his drawings in San Juan and Berlin, and his architectural design work has been awarded several times. After relocating to New York, where he currently lives, He developed the thesis Destructive Knowledge: Tools for Learning to Un-Dō around the work of the artist Gordon Matta-Clark, obtaining an MS in Critical, Curatorial and Conceptual Practices in Architecture of the GSAPP at Columbia University. He is a partner of A(n) Office, based in New York and an Adjunct Faculty at the School of Architecture of the New Jersey Institute of Technology and the Architecture Department at Barnard + Columbia College.
< prev | next >