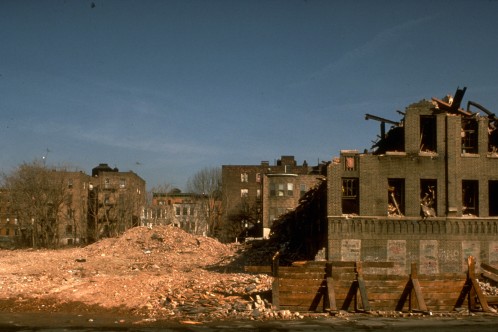 The New American Ghetto was a collaborative, multi-media project that addressed the crisis in public housing and urban community development in North American cities. Based on the extensive research and documentation of photojournalist Camilo José Vergara and including contributions by the Municipal Art Society, the Graduate School of Architecture at Columbia University and the staff of Storefront itself, the joint exhibition demonstrated how the legacy of urban development, undertaken in an attempt to reclaim deteriorating neighborhoods, had instead resulted in new ghettos— bleak tracts of public housing surrounded by community service facilities, creating what have been called “reservations for the poor.”