By Gary Hustwit and Jon Pack 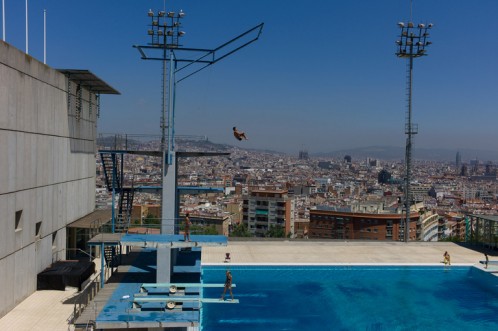 Some former Olympic sites are retrofitted and used in ways that belie their grand beginnings; turned into prisons, housing, malls, gyms, churches. Others sit unused for decades and become tragic time capsules, examples of misguided planning and broken promises of the benefits that the Games would bring. After the events are over, the medals have been handed out and the torch is extinguished, what’s next? What happens to a city after the Olympics are gone?

On the occasion of the 2012 London Olympics, Storefront for Art and Architecture presented The Post-Olympic City, an exhibition of works-in-progress from “The Olympic City Project” by photographer Jon Pack and filmmaker Gary Hustwit. The exhibition paired a selection of photos Pack and Hustwit had taken documenting sites of former host cities for the Olympic Games with archival images, research materials, video and Olympic ephemera, exploring the life of the post-event city. As part of the exhibition, Storefront live broadcasted the 2012 Olympic Games in the gallery.

The Olympic City is an ongoing project by Pack and Hustwit that examines the legacy of the Olympic Games in former host cities around the world. Since 2008, Pack and Hustwit have sought out and photographed the successes and failures, the forgotten remnants and ghosts of the Olympic spectacle. Thus far they’ve documented Athens, Barcelona, Mexico City, Los Angeles, Montreal, Lake Placid, Rome, and Sarajevo, with plans to document Beijing, Moscow, Berlin, London, and other Olympic cities. The project will culminate with the publication of a limited-edition book of photographs in Spring 2013.


Jon Pack is a Brooklyn-based photographer whose work has been exhibited in galleries in the US and Europe, and has appeared on book covers from publishers including Simon & Schuster and Random House. His previous projects include the limited-edition book Out There; That Thing We Call Nature.

Events
An exhibition opening reception took place on August 7, 2012, 7-9PM. Storefront hosted an event on August 14, 2012 from 7-9PM, where the artists and invited panelists discussed the “after-match” of the Olympic games on host cities and their urban environments. All events were free and open to the public.