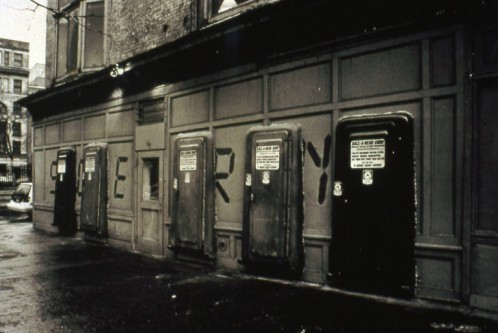 In Unprojected Habit, James Keyden Cathcart, Frank Fantauzzi and Terrence Van Elslander installed five functioning portable toilets directly into Storefront’s façade. Normally used at construction sites and fairgrounds, these prefabricated metal units were accessible from the street, while their bodies, together with the fragments of the removed façade, projected into the exhibition space. The role of the gallery was inverted: the general public became the user/ viewer, while the traditional gallery visitors were exposed to the rear end of toilets. By turning a space of higher aesthetics into a service station for public needs, Unprojected Habit usurped the exclusivity of cultural space and suggested an art that can embrace social and urban functionality.