A Perfect Home: The Bridge Project 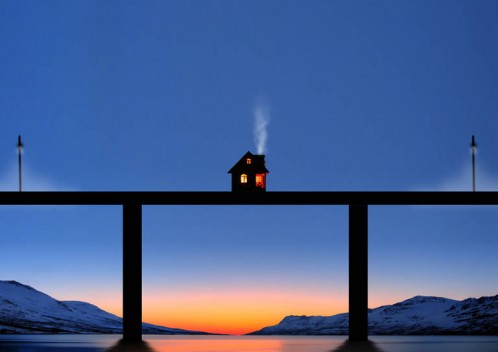 Storefront for Art and Architecture is extremely pleased to announce the inauguration of its 2010-11 exhibition season with a new project by internationally acclaimed artist Do Ho Suh. The Bridge Project is Do Ho Suh’s most recent chapter in his ongoing work, A Perfect Home.

Over the past two years Do Ho Suh and his team of researchers, architects, and designers have generated four fantastical bridge designs that propose ways to connect Seoul, South Korea, and New York City. This conceptual project, which roots back to Do Ho Suh’s first drawings of this inhabitable bridge in 1999, proposes to build a bridge that joins two homes into one, connecting the spatial, temporal, psychological, and cultural distance between Seoul and New York. The project constructs the bridges within a new space of projected desires where economic and structural optimization are not the defining elements of design. His studio’s rigorous and speculative research method has led to the uncovering of a multitude of challenges. Each of the four bridges uses different technologies, structures, and forms to contend with the issues of climate, biodiversity, and human activity. Each design factors in specific environmental and oceanographic data: ocean current, tide, wind, wave, salinity, temperature, sea level, precipitation, snowfall, foliage, cloud fraction, hot spot, natural disasters, the migratory routes of aviary and marine life, etc. The plans also consider political conditions, factoring in missile testing, as well as the migratory patterns of people via air route, ocean liner route, and cruise routes.

Do Ho Suh is well known for his post-minimalist sculptural works that tackle questions about notions of home, place, site, and memory. His experience of transcultural displacement motivates his ongoing inquiry into the ways we conceive of and build our concept of home. The Bridge Project, however, does not resemble the more polished works that are shown in museums throughout the world. Rather, the exhibition presents the hypothetical research as an experimental lab within the gallery space and will present the studio’s research and designs. The Bridge Project operates like an open workshop. During the first two weeks of the exhibition the design team will continue to generate solutions for this bridge that spans from Seoul to New York. Documentation of the work made during this period will be included in the exhibition catalogue.

Yasmeen M. Siddiqui is an independent critic and curator. Her work is informed by graduate studies in medieval Islamic art history, a location where art and architecture convene as a singular aesthetic system. In 2005, she joined Storefront’s curatorial staff, after having completed an MA at the Center for Curatorial Studies, Bard College. Previously, her major work was as an art and architecture writer and editor. From 1999 and 2001 she was senior editor of the architecture magazine Medina, a bilingual platform produced in Cairo. During this period she also worked as art critic at The Cairo Times. From 2002-2004 she edited the MIT project ArchNet. Selected publications include: “Stability” in Alex Schweder, Lawrimore Projects Catalogue (2009); “Yasmeen Siddiqui in conversation with Melvin Charney,” in Between Observation and Intervention: The Painted Photographs of Melvin Charney, DAP (2009); Intimating Architecture in Modern Painters (July-August 2007); Histories of Violence in The Brooklyn Rail (March 2006); Nadim Kufi at Gallery 108 in Flash Art (2003); Emergent Forms: Sabah Naim Reconceptualises Movement in Fault Lines, Contemporary African Art and Shifting Landscapes, London: inIVA (2003).

Sponsors
Major lead support for this exhibition is provided by Yun Jie Chung.The exhibition is also made possible by generous funding from The Graham Foundation for Advanced Studies in the Fine Arts, and Lehmann Maupin Gallery.