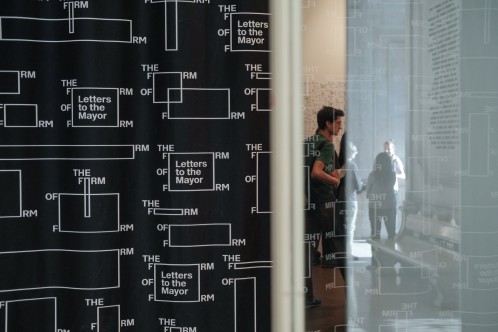 Letters to the Mayor: Lisbon, 2016. Storefront for Art and Architecture. Courtesy of Ivo Poças Martins.

In collaboration with the Lisbon Architecture Triennale (4e) and Galeria dos Paços do Concelho, Storefront presents Letters to the Mayor: Lisbon as part of the global Letters to the Mayor project. Each iteration presents a collection of letters by more than 100 architects, addressing the most pressing issues facing their city.

ABOUT THE LOCAL CURATOR

Ivo Poças Martins was born in Porto in 1980 and graduated from the University of Porto’s Faculty of Architecture (FAUP) in 2005 (having also attended the École National Supérieure d’Architecture Paris-Val de Seine 2002/03 under the Erasmus programme). He is currently working on his PhD thesis at FAUP.

Parallel to his academic work, Ivo is also a partner in the Ivo Poças Martins e Matilde Seabra Arquitectos firm. He is founder and co-editor of the fanzine Friendly Fire dedicated to architecture and urban culture.

From 2012 to 2015 Ivo was a member of the editorial board of Jornal Arquitectos. In 2016 he joined the team for the 4th edition of the Lisbon Architecture Triennale as a curatorial assistant.