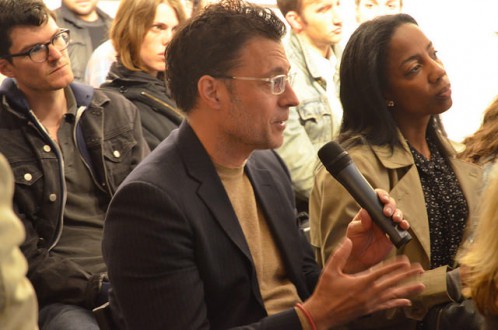 Azurest South is a little known modernist house by Amaza Lee Meredith, an untrained black woman architect practicing in Virginia from the 1920s onward. The house, designed by Meredith for herself and her partner, stood radically apart from its surroundings.

Salon Series: (Black) Sexuality and Space brings together Mario Gooden, Mabel Wilson, and Meredith TenHoor to discuss the the contemporary resonance of Azurest South, which presents complex negotiations regarding the notions of public and private space and reworks the masculinist guises of modernism.

Prompted by the lines of inquiry opened by Mario Gooden in his newly-released Dark Space: Architecture, Representation, Black Identity, this Salon Series will discuss architecture, representation, gender, and race as it relates to Azurest South. Placing the house within the context of projects such as Adolf Loos’s House for Josephine Baker, participants will explore how the Azurest South relies on particular tropes and notions of identity to communicate its significance. Participants will question the implications of the project, and ask how it might inform future approaches to spatial practice that address gender and race.

Copies of Dark Space: Architecture, Representation, Black Identity (Columbia Books on Architecture and the City, 2016) will be available for purchase at the event. The book can also be ordered online here.

About the Salon Series and OfficeUS

Dark Space: Architecture, Representation, Black Identity is as collection of essays by architect Mario Gooden that investigates the construction of African American identity and representation through the medium of architecture. Comprised of five texts, Dark Space moves between history, theory, and criticism to explore a discourse of critical spatial practice involved in the constant reshaping of African Diaspora. Within his discourse, Gooden presents series of questions that interrogate and illuminate alternative narratives of “African American architecture,” to reveal compelling methods of translating the philosophical idea of the African Diaspora experience into space.