Storefront for Art and Architecture advances innovative and critical ideas that contribute to the design of cities, territories, and public life. Storefront’s exhibitions, events, competitions, publications, and projects provide alternative platforms for dialogue and collaboration across disciplinary, geographic, and ideological boundaries. Since its founding in 1982, Storefront has presented the work of over one thousand architects and artists.

Storefront was founded in 1982 by Kyong Park as an experimental forum and exhibition space for activating and engaging emerging voices and promoting public discourse around issues effecting, influencing and challenging the built environment.  The organization presented its first program, Performance A-Z, on September 18,1982. The inaugural exhibition included a series of 26 consecutive nights of performances by 26 artists.

Since the launch of inaugural Performance A-Z, Storefront has continued to shape itself as a platform for emerging ideas that lie at the intersection of art and architecture, and for open dialogue and innovative exchange beyond and across borders, backgrounds and ideologies, addressing issues from new technology to the social and political forces that shape the built environment. Throughout its history, the organization has investigated critical social issues such as homelessness (1985), gender identity (1994), public housing (1984), and has responded to geopolitical and economical conflicts and movements such as the Gulf War, the Israeli-Palestinian conflict and the Occupy Wall Street movement (2011) from a design perspective, while offering emerging artists and architects the opportunity to present new ideas and exhibit innovative work. Over one thousand internationally recognized artists and architects have shown at Storefront, including Peter Cook, Diller+Scofidio, Tony Feher, Dan Graham, Coop Himmelblau, Alfredo Jaar, Kiki Smith, Lebbeus Woods, Enric Miralles and Carme Pinós, Eyal Weizman, Bjarke Ingels, Didier Fiuza Faustino among many others.

Storefront is committed to spatial experimentation and innovation, and remains one of the only platforms focusing primarily on the intersection of architecture, art, and design.

Storefront’s gallery space is located at:

FREE AND OPEN TO THE PUBLIC

Storefront  can provide assistance to visitors with disabilities by request.

Storefront’s gallery is located in a unique triangular ground-level space at the corner of Kenmare Street and Lafayette in the Chinatown/Little Italy/SoHo area of New York City. Situated at the intersection of three radically different cultural sectors, Storefront’s gallery is nearly 100 feet long, tapering from 20 feet to 3 feet at its west end. In 1993, Storefront commissioned a collaborative building project by artist Vito Acconci and architect Steven Holl. The project replaced the existing exterior façade with a series of twelve movable panels that pivot vertically or horizontally to open the entire length of the gallery directly on to the street.

Storefront’s physical location and façade can be understood as a reflection of its mission and practice, not only blurring the boundary between interior and exterior but enabling an endless possibility of panel configurations which encourage artists and visitors to create their own experience of entry, navigation, and absorption in the gallery space. The unusual conditions of the gallery space, from its triangular floor plan to the unique access to the street created by the Acconci/Holl façade have made the Storefront Gallery an architectural landmark in New York City and the collective imaginary of art and architecture institutions.

Exhibitions. Exhibitions at Storefront take experimentation and risk as a priori condition. From single artists with site-specific installations to thematic group shows, Storefront works as a public forum for emerging voices to explore radically new spaces of action that do not find a space of resonance within the established and canonical forms of communication and display. Exhibitions at Storefront engage the physical space of the gallery, the street and the visitors, becoming architectural experiments themselves.

Storefront Series. Storefront produces event-based programming for the development and exposure of architectural, artistic, social, and political ideas. The Storefront Series is comprised of artist talks, lectures, panel discussions, and other events to engage with architects, artists, students, and academics in the fields of art, architecture, and design and offer educational opportunities for the general public. All events are documented for the organization’s archive and website, allowing audiences to continue to engage with topics well beyond the talk at Storefront. These include the Cabaret Series, Definition Series, Drawing Series, Interrogation Series, Listening Series, Paella Series, Productive Disagreement Series, Manifesto Series, Reading Images Series, Salon Series, and Total Enthusiasm Series.

Competitions. Competitions at Storefront focus on overlooked aspects of society or politically delicate conditions and open up the debate by bringing design awareness within specific aspects of society. Storefront’s competitions call for ideas from artists, architects, and citizens at large to contribute to the dialogue around unique urban problems.

Publications. Storefront publishes books about art, architecture, and design that present in printed form different exhibitions, events, and ideas developed at Storefront. Past publications have included White House Redux (2008), a compilation of projects related to a competition launched by Storefront on what the residence of the White House in Washington DC would look like if it were designed today; 49 Cities (2009, 2010), a catalogue of a project which included observing and comparing 49 cities over the course of various years; Storefront Newsprints 1982-2009 (2009), a compilation of Storefront’s historic newsletter over the years; and A Contingent Object of Research: The Bridge Project (2010) which includes a range of critical essays about the work of Do Ho Suh.

In 2013, in partnership with Lars Muller Publishers and Natasha Jen / Pentagram, Storefront launched the first two issues of the Manifesto Books Series, which aims to encourage the formulation of positions in relation to specific topics and instigate spirited discussion and exchange in a dynamic and polemical context: Double (2013) and Formless (2013).

In 2014 and as part of the project OfficeUS, Storefront published two books, OfficeUS Agenda and OfficeUS Atlas.

Projects. Special projects produced by Storefront allow the organization to engage with new environments and audiences and support ideas and projects beyond the confines of the gallery space. Projects include the Draw Think Tank application, the annual Critical Halloween Party, the Spacebuster (by Raumblabor), the Speechbuster (by Jimenez Lai and Grayson Cox) among many others.

Global Platforms. Storefront has historically engaged with audiences through different formats of exchange with global alternative architecture and art frameworks. Past global projects have included pop up spaces and talks in Budapest, Los Angeles, Milan, London and Mexico DF.

Current global projects include the ongoing Storefront International Series (Dominican Republic, Portugal and other locations are in the works) and WorldWide Storefront, a new initiative to provide a simultaneous, multi-locus of alternative spaces around the globe and a digital platform for the expression and exchange of latent desires within contemporary art and architecture practices. 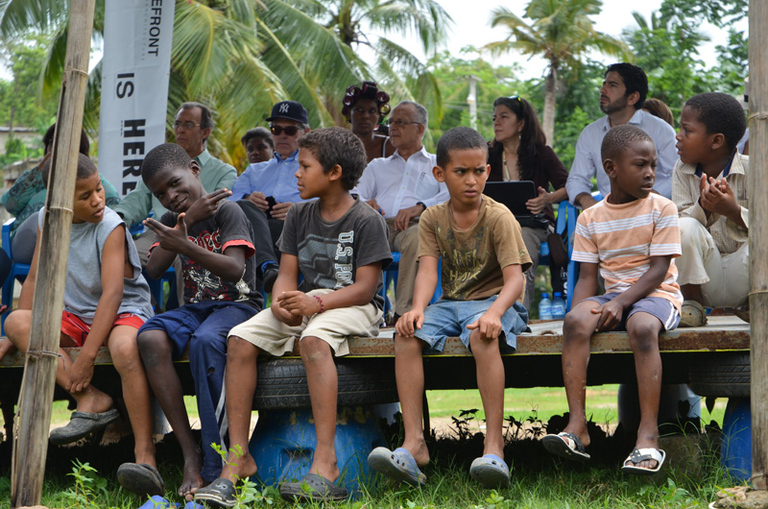 OfficeUS, was launched as an experimental office and exhibition space in 2014 inside the US Pavilion at the XIV Venice Architecture Biennale as Storefront was selected by the State Department to represent the United States of America.