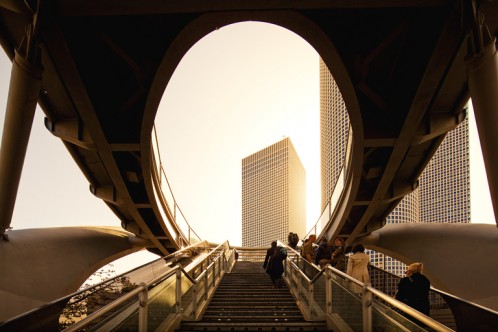 Aircraft Carrier examined the time period between two crises of capitalism in Israel -1973 and 2008- as an approach for understanding some radical changes in Israeli architecture. The eventful year of 1973 marked a watershed in the workings of global capitalism, in American strategic interest in the Middle East, and in Israel’s social, economic and political systems and policies. These elements, shaped by territorial struggles and energy crises, dramatically altered the course of Israeli architecture. Aircraft Carrier dealt with this transformative period through an investigation of the American influences that enabled such innovations and tragedies.

The exhibition was accompanied by a book, published by German publisher Hatje Cantz and edited by the curators, which contextualized the phenomena in larger transformative processes. The book includes texts by Milton Friedman, Justin Fowler, and Eeva-Liisa Pelkonen and visual works by participating artists and by Baltimore-based graphic designers, Post Typography.

Florian Holzherr (b. 1970), is a world famous architecture and art photographer. He lives in Munich, New York and works worldwide. His work ranges between art, documentation and architecture and he has worked with artists such as Dan Flavin, Donald Judd and Museums like lacma or the dia art foundation and with architects such as Skidmore Owings and Merrill, Guenther vogt, and MOS.

Assaf Evron (b. 1977) is an MFA candidate at the School of the Art Institute of Chicago (SAIC). His photographs and photo-based works focus on the structures and forms of the overlooked, and reveal it as a visual state of simultaneous excess and deficiency. Evron has exhibited internationally and has received various awards such as The Cohn Institute Grant (2009, 2010) and The Israeli Ministry of Culture and Education Prize for Young Artists (2010). His works can be found in a range of private and public collections, including those of the Israel Museum in Jerusalem, the Haifa Museum of Art and the Petach Tikva Museum of Art. Evron has earned his BA from the Department of General History at the Tel Aviv University, and is currently finishing his MA studies at The Cohn Institute for the History and Philosophy of Science and Ideas, Tel Aviv University. His thesis dissertation deals with the philosophy of the visual and linear perspective.


Fernando Guerra (b. 1970) is a Portuguese photographer. His work is regularly featured in a variety of publications including Casabella, Wallpaper*, Dwell, Icon, Domus, A+U. He collaborates with various Portuguese architects such as Álvaro Siza, Carlos Castanheira, Risco Arquitectos, Manuel Graça Dias + Egas José Vieira, ARX Portugal, in addition to international architects such as Jordi Badia, Zaha Hadid, I. M. Pei.


Erez Ella is the founder of HQ Architects In Tel Aviv. Among others, the office is practicing research, urban planning, and design of housing and public buildings. Prior to establishing HQ. Ella was a Principal at REX and worked as an Associate at OMA. At REX he was co-leading projects include the Museum Plaza in Louisville,Vakko HQ and others, at OMA he served as Project Architect to the Television Cultural Center for China Central Television (TVCC) in Beijing and the Whitney Museum of American Art in New York. He was the Eero Saarinen Professor at the Yale School of Architecture and is currently leading the sustainable design unit at the Bezalel Academyof Art and Design, Jerusalem. He is the editor of the publication Aircraft Carrier (Hajte Cantz, 2012).

Milana Gitzin-Adiram was formerly the director and chief curator at MoBY – The Museums of Bat Yam. She structured the masterplan for the museum network and played an instrumental role in making MoBY one of Israel’s leading centers for contemporary art. Prior to MoBy she was the curator and the director of TheHeder contemporary art gallery in Tel Aviv. She finished her study for a Master in art history in the Tal Aviv university, and work as a consulter for art institutes and municipalities. She is the editor of the publication Aircraft Carrier(Hajte Cantz, 2012).

Dan Handel is an architect, a PhD candidate at the Technion Israel Institute of Technology, and the inaugural Young Curator at the Canadian Centre for Architecture in Montreal, for which he developed the exhibition First, the Forests (2012). He holds degrees from the Harvard Graduate School of Design, and the Bezalel Academy of Art and Design in Jerusalem. His writing has appeared in Thresholds, Conditions magazine, Pin-Up, Bracket, and theJournal of Landscape Architecture (JOLA), among others. He is the editor of the publicationAircraft Carrier (Hajte Cantz, 2012), and of Manifest, an upcoming journal of American architecture and urbanism.

This exhibition was funded in part by Artis, Orian Ltd. (Partner of the DB Schenker Network) and the Office of Cultural Affairs, Consulate General of Israel in New York.