Celebrating the most feared ghosts in art and architecture 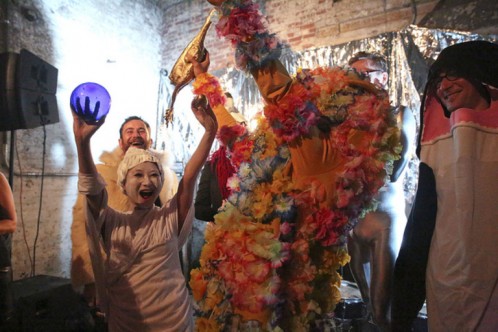 Golden Egg to the best political statement: “Burden of Life”

Golden Egg to best social critic: “Employee of the month”

Golden Egg to best quote: “Knife in the Watercooler”

The Grand Prizes for CorporateAvantGarde, a “Golden Cage” and a “Golden Chicken” went to “Capitalism and Schizophrenia” and “Jeff Koons Retrospective,” respectfully.

The winner of the “People’s Choice” vote through an online costume contest hosted by Hyperallergic went to “Exposed Brick”.

The jury for the 2013 Critical Halloween Costume Competition consisted of four individuals with different relations to the words and worlds of Corporate and Avant Garde: Jacob Reidel currently working at Ennead Architects and one of the editors of the magazine CLOG; Max Sanjulian, an ex-SOMer that started his own firm and music band with the title Inferno Blanco; Charles Renfro, partner of an office of hundreds intending to be 3; and Eva Franch i Gilabert, Storefront Director.