Speechbuster Residency at The Clemente, 2015. Photo by Naho Kubota.

A Choreography of the Speechbuster from The Clemente to Sara D. Roosevelt Park 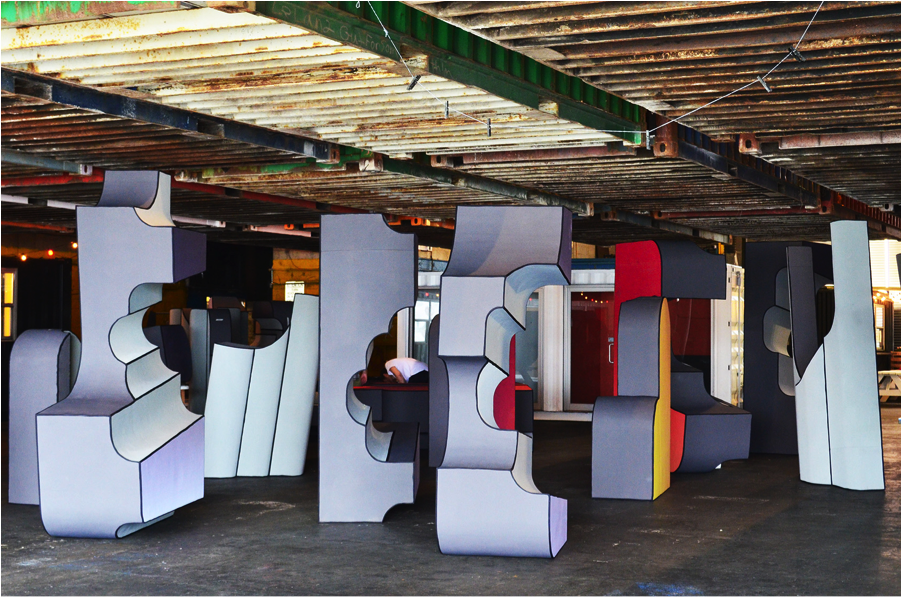 On May 30th, the Speechbuster, a project by Storefront that migrates through public and private spaces, will travel from its current space of residency at the Clemente Soto Vélez to Sarah D. Roosevelt Park, activating the route of the 2015 IDEAS CITY Festival.

Rivington Migrations, choreographed and directed by Jonah Bokaer –recently named a Guggenheim Fellow in Choreography–, is a journey by a hundred individuals who create various spatial configurations with the 32 pieces of the Speechbuster. Participants will traverse the outdoor spaces along Rivington Street before entering into the park, moving through the varying streetscape and engaging with the urban landscape and passers-by.

The choreography of Rivington Migrations connects the migratory histories of the neighborhood with the movement of the Speechbuster’s architectural components.

The choreographed migration engages three discrete layers of Bokaer’s practice: the staging of movement onto performers; outdoor transportation in urban space on a large scale; and a sculptural vocabulary which supplicates into the volumes described by architectural units, blending the positive and negative space of performers and objects.

The performance commences at 12 pm at the Clemente Soto Vélez Cultural and Educational Center, and concludes at 1:30 pm in Sara D. Roosevelt Park.

The title of the work, Rivington Migrations, refers to various histories and conditions: to James Rivington, who published the loyalist Tory journal The New York Gazetteer on Rivington Street; to the runes, tablets, and Semitic texts found on the remnants of the exteriors of Rivington Street’s Jewish, Romanian, and immigrant influenced architecture; to the totem-like forms of the Speechbuster various configurations; and to contemporary displacement on today’s rapidly changing Rivington Street.

The Speechbuster is a 32-piece and 54-foot long mobile neoprene structure designed in 2013 by Jimenez Lai and Grayson Cox. It is the same dimensions as Storefront for Art and Architecture’s gallery. As a performative structure, it moves through private and public spaces, triggering urban encounters and conversations as a result of its ability to create numerous spatial configurations.

Do you want to take part in Rivington Migrations? A select group of individuals will be chosen to participate. Please complete a volunteer form (found here), and we will be in touch to let you know if you have been chosen for this opportunity.

Rivington Migrations
Jonah Bokaer, Choreography & Direction
A collaboration between Storefront for Art and Architecture and the Clemente Soto Vélez Cultural and Educational Center

About the Artist:
Jonah Bokaer (Choreography & Direction) was born to Tunisian and American parents in New York State. He has been creating dances for stages, museum, galleries, and outdoor spaces throughout the world since 2002. He is the author of 35 choreographies, ten videos, three motion capture works, three interactive installations, three mobile applications, and one film. His work has been produced at venues in locations such as Belgium, Canada, Croatia, Cuba, Denmark, France, Germany, Greece, Holland, Hungary, India, Italy, Poland, Spain, Switzerland, Thailand, Tunisia, the U.K., and the U.S.

Bokaer was the first dance artist to be inducted as a Young Leader by the French American Foundation (2008–2009), and he is among the very few dance artists to be recognized in the Crain’s NY Business list of “40 Under 40” (2011). Bokaer was among ten US artists to receive a Doris Duke Charitable Foundation “Building Audience Demand” grant award between 2013 and 2015, in partnership with the Georgia Institute of Technology.

Bokaer lives with his partner in Brooklyn, New York, and maintains a drawing studio. His work can be found at www.jonahbokaer.net.