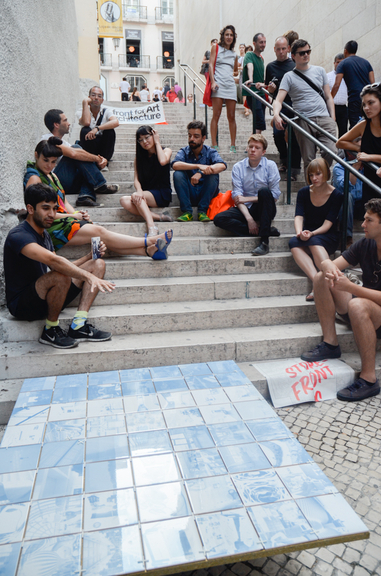 A growing disapproval of the structures of government around the world, including various versions of representative democracy, is producing an increasing desire for the reimagination of structures of exchange, debate and social growth.

While the Body Politic is supposed to comprise of each one of its citizens, current political bodies seem to comprise only a few. As the disenchantment of current structures of governance grows, Reading Images looks closely at the spaces of domestic interaction and action, where contemporary subjects mediate between local and global dignitaries with emotional and economical power to re-imagine new forms of collective political governance.

The event took place in front of the project called ‘Horror Vacui,’ a participatory installation based on the construction of a building façade made of interior images sent by contributors printed in traditional Portuguese tiles.

Reading Images Series are image-based events that invite individuals to closely look into images of a specific site or theme and develop and construct arguments, narratives, and observations that produce incisive readings of form, politics, gaze, and representation.