Episodes of StorefrontTV Season 3 will air weekly on Wednesdays at 6 pm ET here on Storefront’s website, as well as on YouTube and Instagram Live. Each episode is between 5-10 minutes.

Tune in below on Wednesday, July 15th from 6:00-6:05 pm ET for Episode 4: Se va a caer (It’s Gonna Fall) by Julieta Gil. To watch episodes from past weeks, see episode description sections below, or check out our YouTube playlist. 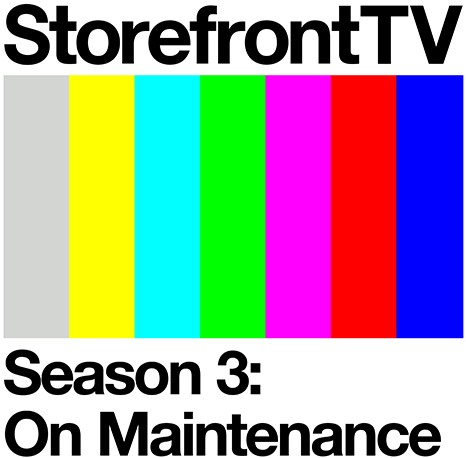 StorefrontTV is an online broadcast channel created in 2014 that presents experimental programming about the built environment. In 2020, Storefront launches the third season of StorefrontTV with the theme On Maintenance.

Presenting newly commissioned videos by artists and architects, this season aims to explore and redefine the notion of maintenance. Participants interpret “maintenance” in various ways, some shared and others divergent, and many reflecting upon particularities of our current moment. Episodes address topics such as the radical reinterpretation of societal values, efforts to avoid wear on the body and mind, networks of people that sustain a neighborhood, nostalgia for unrealized change with the passing of time, and the spatial expertise of domestic laborers, among others.

Each episode provides artists and architects with a space to playfully and critically address a key aspect of social life and culture through the lens of maintenance. Learn more about forthcoming episodes below, and stay tuned for the full schedule.

Learn more about the previous season of StorefrontTV here.

by Mariela Scafati (with music by Daiana Rose)

I can’t remove the cat hair from my clothes

nor do I want to

if anything at all

naming at least one place

I am comforted by the memory of some gesture, of your voice or your gaze

other times I sleep,

those times give me

some notion of life

the cat looks at the glass of water

neither thirst nor the damn habit of throwing the glass

a calm that is impossible to sustain

not even the damn habit.

I’m sharing this “table theatre” that I made one night, accompanied by the song “Noches vacías” (“Empty Nights”), a melancholic version by Daiana Rose interpreted from the well-known track by Gilda. I chose to use my hands in an attempt at closeness, and to be able to think about what, from this time, we wish to endure and what we are no longer willing to hold onto.

In the first episode of StorefrontTV Season 3, Buenos Aires-based artist Mariela Scafati questions the notion of maintenance by exploring the absurdity of the concept of “normalcy” in our current times, and contemplating the values that shape our societies. Although Scafati’s exhibition Bodybuildings would have been on view at Storefront’s gallery space this summer, she is ready to embrace the challenge of meaningful change brought on by the current moment.

Mariela Scafati (b. 1973) is a Buenos Aires-based artist using mediums of painting, installation, screen printing, and performance to address issues of gender rights and identity. Scafati completed her studies in Visual Arts at the E.S.A.V. in Bahía Blanca, Argentina. She has been exhibiting works inside and outside of Argentina since 1988. She is a co-founder of Taller Popular de Serigrafía (Popular Silkscreen Workshop), created collectively with the Popular Assembly of San Telmo that emerged during the December 2001 insurrection. She has also been a part of the non-group Serigrafistas Queer (Queer Silkscreeners) since 2007, as well as a member of Cromoactivismo (Chromoactivism). Scafati has worked at the Centro de Investigaciones Artísticas (Center of Artistic Investigations) since 2010, and has participated in many other group-based and collaborative projects that range in medium from education to printmaking, radio, and theater.

Daiana Rose (b. 1980) is a visual artist and a member of Cromoactivismo (Chromoactivism) and Serigrafistas Queer (Queer Silkscreeners). Her work focuses on drawing and performance. She is interested in using her art for communication and learning, and in exploring art as a method of emotional survival. Rose is a graduate of the Lola Mora National School of Fine Arts and a CIA2015 Fellow. Some of her individual exhibitions include Miss Verduritas (CC Recoleta, 2009), A Florencio (Orange Green Gallery, 2013), Bullfighting (Agatha Costure, 2014), and I am attracted by what it brings, I am attracted by what attracts (UV Gallery, 2018). In 2019, she released an album of 11 songs entitled Este peludo sentir (This Furry Feeling) with the label Otros Formas, produced by Lola Granillo. Since 2018, she has been performing this music in various locations.

While visiting relatives in Kochi, Japan, my partner’s hometown, the international lockdown caused by coronavirus catches us off guard, and we remain abroad in semi-quarantine for three months. Before Wearout: portrays some cultural nuances of domestic life that I encounter while living in this new environment. In a small space, I perform a sequence of actions that viewers can try at home using resources they have on hand. For me, these include a futon, a pomelo, and some cleaning tools.

Though not without a struggle, I try to do as the locals do. I learn about the culture by conversing with my mother-in-law, eating seasonal produce, and browsing old housewives’ magazines. I reflect upon being confined to a context that never seems to change, and the sense of weariness that this can create. Now that I find myself having “more time than life,” I consider the importance of establishing self-care methods to avoid wearout, and the ways in which mundane actions gain new meaning as we see things around us suddenly shifting.

In Before Wearout:, the second episode of StorefrontTV Season 3, artist Jessica Kairé performs the notion of maintenance by practicing small actions of self-care while quarantined far from home. Playing with the notion of “wear” as a noun and a verb, her actions acknowledge both the newness and consistency of her surroundings in a time when everything has changed.

Jessica Kairé (Guatemala, 1980) is an artist and educator based in New York, and co-founder and co-director of NuMu (Nuevo Museo de Arte Contemporáneo), an egg-shaped museum located in Guatemala City that aims to satiate the lack of other contemporary art institutions in the country. In her practice, Kairé combines artistic and domestic elements to create works that engage the public in various forms of activation such as eating, manipulating and wearing. She is particularly interested in appropriating materials, objects and contexts that are informed by personal or collective conflict, and altering the way we relate to them through an often playful and humorous approach. Her work has been shown at museums, institutions, and galleries such as the Los Angeles County Museum of Art (LACMA); Proyectos Ultravioleta, Guatemala City; Museo Jumex, Mexico City; SITElines.2018 Biennial, Santa Fe; 2da Gran Bienal Tropical, Loíza, Puerto Rico; and more.

(and Other Spatial Acts of Resistance)

An exercise in place-making:

4. Cover the hole with soil.

5. Draw a circle of hot ashes within the limit of the cleared space.

6. Have three priests gather around it with a bucket of water in the middle.

7. Mix coarse salt in the water.

8. Pray over the water, simultaneously sprinkling it around.

In Collective Wakes (and Other Spatial Acts of Resistance), the third episode of StorefrontTV Season 3, Sumayya Vally presents a choreography of “wakes,” both difficult and celebratory. Drawing upon literary and scholarly works as well as historical and contemporary imagery from public gatherings and advocacy movements, Collective Wakes explores what it means to maintain community over time.

Sumayya Vally is the founder and principal of Counterspace. Her design, research and pedagogical practice is committed to finding expression for hybrid identity and contested territory. She is obsessed with Johannesburg as a laboratory for finding speculative histories, future archaeologies, and design languages; often with the intent to reveal the invisible. Her work is often forensic, and draws on performance, the supernatural, the wayward and the overlooked as generative places of history and work. She is presently based between Johannesburg and London as the lead designer for the Serpentine Pavilion 2020/20 Plus 1.

by Julieta Gil (with Concepción Huerta) 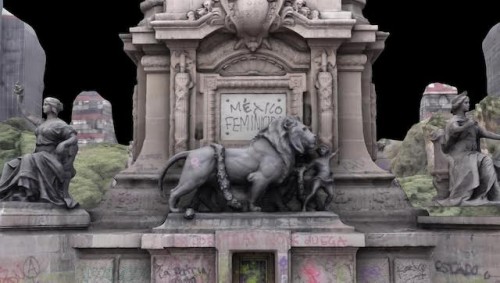 On March 8th, Women’s Day, millions of us marched in the public sphere, demonstrating and resisting together. That day, we took a collective vow to dedicate our lives to putting an end to this violence.

The day before the protests, I panicked. My cries merged with the cries that emanate from the bodies of the countless women, non-binary, and trans people who have undergone systemic violence that goes unrecognized, unseen, and nonexistent.

Now, under lockdown, many are confined to the very spaces where the violence originates. Still, we took a vow. Today, I feel like I am part of something bigger than myself – something so big that it can make another thing fall.

The patriarchy is gonna fall.

In Se va a caer (It’s Gonna Fall), the fourth episode of StorefrontTV Season 3, Julieta Gil builds upon a series of works entitled Nuestra Victoria (Our Victory) about a prominent Mexico City monument called the Ángel de la Independencia (Angel of Independence). Last summer, hours after serving as the site of protests against violence toward women, the Ángel was boarded up. The government soon began working on its restoration, erasing the voices of protest that it carried. Se va a caer (It’s Gonna Fall), created in collaboration with Concepción Huerta, allows the words and actions of civil resistance to be maintained in our collective memory.

Julieta Gil (b. 1987) is a visual artist based in Mexico City. Her creative research incorporates installation, sculpture, 3D animation, and print in order to explore topics of simulation, as well as the overlaps that occur in the interaction between physical and digital realities. Through her work, she creates narratives that reflect upon institutional pasts, presents, and futures. Julieta holds an MFA from UCLA Media Arts, and a BArch from the Universidad Iberoamericana in Mexico City. In 2015-16, she was a grant recipient of Mexico’s National Fund for Culture and Arts in the field of art and technology research and production. Her work has been presented in spaces such as: the Laboratorio de Arte Alameda (Mexico City), the Nevada Museum of Art (Reno, NV), Future Gallery (Mexico City), Human Resources (Los Angeles, CA), and Zuecca Projects (Venice, Italy).

Concepción Huerta (b. 1986) explores sound through recordings of everyday objects and instruments which, when reproduced and manipulated with tape recorders and processed tapes, create atmospheres based on ambient and noise elements. She creates sound narratives that construct previously invisible stories, eschewing the boundaries of musical genre. She has played in VOLTA, Meditatio Sonus, Overflows, Translation II, Articulations of Silence, THRESHOLD, Aural, Remains, NSMBL, Anxrmal, No Idea Festival, and C4NM, among others. She has also collaborated with many artists, some of whom include: Enrique Arriaga, Turning Torso, Fernando Vigueras, Rodrigo Ambriz, Martín Escalante, Arcangelo Constantini, CNDSD, Viian, Nika Milano, Mabe Fratti, Gibrana Cervantes, Camille Mandoki, Alejandro Morse, among others.