home • archive • A Civilian Occupation: The Politics of Israeli Architecture

A Civilian Occupation: The Politics of Israeli Architecture 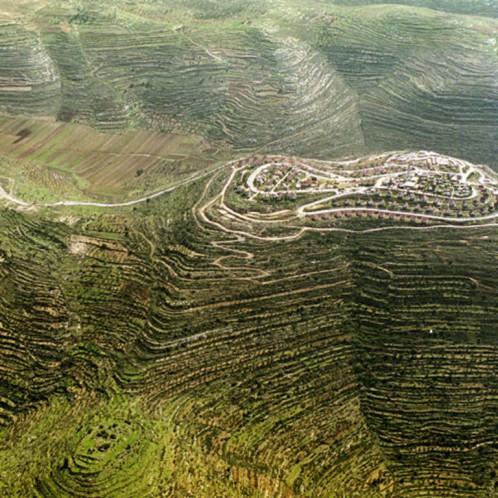 Throughout the last century, a different kind of warfare has been radically transforming the landscapes of Israel and Palestine. The mundane elements of planning and architecture have been conscripted as tactical tools in the Israeli state strategy, seeking national and geo-political objectives in the organization of space. The landscape becomes the battlefield in which power and state control confront subversive and direct resistance. Planning decisions do not follow criteria of economic sustainability, ecology or efficiency of services; rather, they are employed to serve strategic and political agendas.

This project, developed by Tel Aviv based architects Rafi Segal and Eyal Weizman, incorporates investigations by Israeli architects, scholars, photographers and journalists addressing the political role of architecture and planning in the West Bank. Their research reveals the strategic nature of settlement planning through aerial photographs, maps, master plans and a comprehensive series of essays. The project supplements prevalent historical and political analysis of the Israeli/Palestinian conflict with a detailed description of its spatial dimension and the resulting physical transformations. Architecture is presented as a political issue – the material product of politics itself.

A Civilian Occupation was originally commissioned by the Israel Association of United Architects (IAUA) for the International Union of Architects Congress in Berlin, July 2002. However, upon completion of the catalog, the IAUA withdrew its support, canceled the exhibition and banned the catalog. The exhibition at Storefront for Art and Architecture is the first public presentation of the work. The catalog is being reprinted by Verso (London) and Babel (Tel Aviv) and will be available in the spring of 2003. The work will also be included in the exhibition Territories, at KW Institute for Contemporary Art Berlin in June 2003.

Rafi Segal and Eyal Weizman established their office in Tel Aviv in 2000. Recent projects include the redesign of the Ashdod Museum of Art (with Manuel Herz) and a set-design for the Kameri/Itim theatre company. In addition, Rafi Segal designed the internationally acclaimed Palmach Museum in Tel Aviv in partnership with Zvi Hecker. He has recently received the Young Architect Prize from the Israel Association of United Architects. Eyal Weizman is an architect based in Tel Aviv and London. He co-authored Land Grab a human rights report, and conducted a map project of the West Bank for the human rights organization BâTselem. Weizman is currently developing his doctoral thesis ÎThe Politics of Verticality / Architecture and Occupation in the West Bank and Gazaâ into a book and a documentary film.