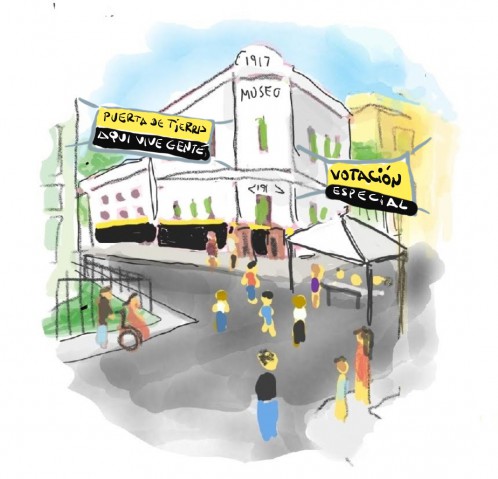 Sign the petition for the Museum of History and Community of Puerta de Tierra here.

See photos from the opening here.

Aquí vive gente (people live here). Throughout the neighborhood of Puerta de Tierra in San Juan, Puerto Rico, murals with this refrain brighten the walls and convey to passersby the self-determination of a community that is taking agency over the future development of its neighborhood.

This vision of collective action and cultural preservation—born out of hope and necessity—has been channeled toward efforts to realize a groundbreaking new organization in Puerta de Tierra. Storefront for Art and Architecture is honored to host the Museum of History and Community of Puerta de Tierra (MHC PDT). Previously housed only in the minds and living rooms of community members, this nascent museum is presented publicly for the first time ever at Storefront’s gallery space.

The museum emerged after years of work by Brigada Puerta de Tierra (BPDT), a multigenerational group of artists and activists. It puts forth the vision that the lived experiences of the people of Puerta de Tierra matter, and that they can uniquely tell the rich and complex histories of a community undergoing intense urban pressures that would drastically alter the character of its social fabric.

Brigada Puerta de Tierra is structured as a horizontal organization that uses art and storytelling as a tool for education. The group has its foundations in grassroots and collective action; it was formed in 2015 as a response to the construction of the controversial Paseo Puerta de Tierra, a major redevelopment project that lacked citizen involvement. With the goal of reclaiming the neighborhood, BPDT has been active ever since. Its members have cleaned, maintained, and transformed abandoned sites in Puerta de Tierra through creative initiatives such as mural-making, gardening, and other outdoor programs that bring neighbors together.

The Museum of History and Community of Puerta de Tierra is BPDT’s most ambitious initiative to date. Over the last few months, Storefront has provided institutional support intended to help fulfill the museum’s mission (developed through self-led workshops) “to affirm, care for, and carry with pride and dignity the cultural legacy of the neighborhood through community participation, and to preserve the cultural heritage and collective memory of Puerta de Tierra.”

Currently without a long-term venue for the museum, Brigada Puerta de Tierra has been working toward rehabilitating and legally gaining access to the Edificio Infanzón, a historic building in Puerta de Tierra that has been abandoned for decades. After its presentation at Storefront, the MHCPDT will launch an international tour to create awareness of both the fragility and power of the neighborhood’s identity. Eventually, Brigada Puerta de Tierra aims to present the museum at its permanent home at the Edificio Infanzón.

Storefront for Art and Architecture and Brigada Puerta de Tierra welcome you to the inaugural public presentation of the Museum of History and Community of Puerta de Tierra.

This group, now known as Brigada Puerta de Tierra, focuses on the reactivation of abandoned areas and preservation of the neighborhood’s history and living culture. Uniting under the slogan “aquí vive gente,” BPDT is organized horizontally and collectively, and operates through four key concepts: self-management, awareness, strategic planning, and collective decision-making. For its various neighborhood initiatives and community activities since 2015, BPDT was recognized with the Merit and Dedication Award of the 46th edition of the Fiestas of San Sebastián Street for its commitment to its community and national culture.

In addition to this exhibition, Brigada Puerta de Tierra is being honored at Storefront’s 2019 Spring Benefit on Wednesday, May 29th at La Marqueta. For more information and to purchase tickets, visit www.storefrontbenefit.org.

Collectively developed by members of BPDT and residents of Puerta de Tierra, with special thanks to www.puertadetierra.info.

Hosted by Storefront for Art and Architecture