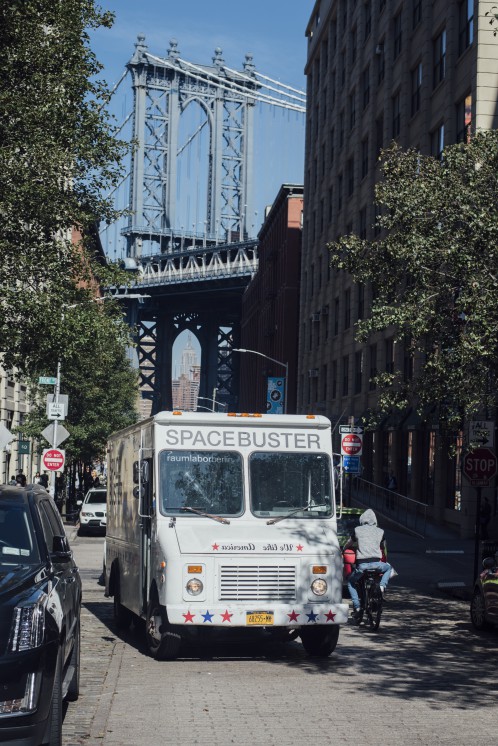 We Like America, 2017. Storefront for Art and Architecture. SPACEBUSTER in New York. Photo: KevinMcElvaney.

We Like America: Spacebuster x Brooklyn Boheme
Saturday, October 14th from 12 pm to 10 pm
Fort Greene Park, Brooklyn (enter at Washington / Dekalb)
#spacebuster     #welikeamerica     @storefrontnyc     @ubermutproject     @raumlaborberlin
As part of We Like America, an experimental road trip through the American Rust Belt to New York, the Spacebuster will set up shop in Brooklyn’s Fort Greene Park for a day-long program beginning with a furniture building workshop. Community residents are invited to participate in building a chair, and can take home their creations. The chair-building exercise is part of GENERATOR, an ongoing prototyping experiment by raumlaborberlin, where community input from each workshop engenders a new model. Brooklyn residents will build the “Sedia Venezana,” developed in Venice during the Architecture Biennale, and the feedback from this workshop will be used in the future towards the “Brooklyn Boheme Chair.”
At dusk, Spacebuster will present an hour of curated short films by Hamburg- and Berlin-based independent filmmakers such as Baltic Raw, with films including Quick Animation (1989), an Eastern Bloc “Berlin-wall era” take on hip hop culture. This will be followed by a screening of Brooklyn Boheme, a love letter to Fort Greene’s past as a vibrant cultural mecca of the late 80s and early 90s. Filmmakers Nelson George and Diane Paragas will participate in a discussion moderated by writer and performer Carl Hancock Rux (who is also featured in the film).
The events are free, kid-friendly, and open to the public.
Event Schedule
12:00 pm: Furniture making workshop as part of GENERATOR
6:00 pm: Screening of short works by Hamburg- and Berlin-based independent filmmakers
7:30 pm: Screening of Brooklyn Boheme
8:45 pm: Discussion with filmmakers Nelson George and Diane Paragas, moderated by Carl Hancock Rux