home • programming: series • Manifesto Series: Towards A Theory of Misbehavior

Manifesto Series: Towards A Theory of Misbehavior 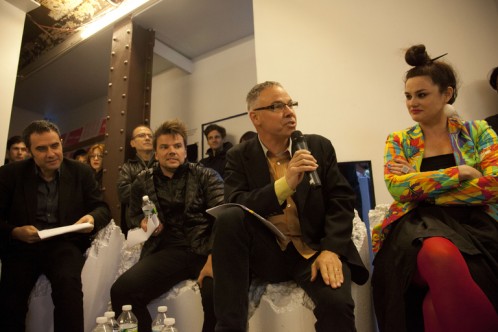 MANIFESTO SERIES: Towards a Theory of Misbehavior

Storefront for Art and Architecture presented Manifesto Series: Towards a Theory of Misbehavior, an event showcasing different generational approaches towards architecture theory on the occasion of the release of The Sniper’s Log: Architectural Chronicles of Generation X by Alejandro Zaera Polo.

The event included a live staging of manifestos that presented different hypothesis and methodologies towards architectural acts of disobedience. The presentations were followed by a discussion between the presenters moderated by Stan Allen.

Rather than a synthetic lecture, participants were invited to present a concise, point-by-point manifesto of 4 minutes of length and a maximum of ten points, with the hope that the ideas exposed would provide a ground for discussion to test and discuss different hypotheses in real time.

About the book
The Sniper’s Log. Architectural Chronicles of Generation X
by Alejandro Zaera-Polo

This compilation of texts written since 1986 reveals a parallel activity to Alejandro Zaera-Polo’s professional life. The book is like a sniper’s log, a register of events for the purpose of accumulating experience, be it academic or professional, trying to identify tendencies and to assess performances, rather than to establish truth. Written for different media and formats (professional magazines, speaking engagements, academic presentations…), the texts are thread together as part of a biographical experience determined by temporal and geographical factors. A graphic texture of more than 500 images captures the temporal framework of these writings and provides a background to trigger associations.

Stan Allen is an architect working in New York and dean of the School of Architecture at Princeton University.  He holds degrees from Brown University, The Cooper Union and Princeton. He has taught at Harvard, Columbia and Princeton, and his architectural firm SAA/Stan Allen Architect has realized buildings and urban projects in the United States, South America and Asia. Responding to the complexity of the modern city in creative ways, Stan Allen has developed an extensive catalogue of innovative design strategies, in particular looking at field theory, landscape architecture and ecology as models to revitalize the practices of urban design.  In 2008, he received a P/A Award for the Taichung Gateway Park and a Faith and Form Award for the CCV Chapel; In 2009 he received a P/A Award for the Yan-Ping Waterfront in Taipei, an AIA Award for the CCV Chapel, the John Q. Hejduk Award, and an Academy Award in Architecture from the American Academy of Arts and Letters; in 2010, his building for Paju Book City in Korea received an AIA Award.  In 2011, the Taichung InfoBox was recognized with a P/A Award, and AIA Awards from New York City, New York State and the Tri-State Region.  In addition to numerous articles and project reviews, his architectural work is published in Points + Lines: Diagrams and Projects for the City, (Princeton Architectural Press 2001) and his essays in Practice: Architecture, Technique and Representation (Routledge, 2008).  His most recent book is the edited volume Landform Building: Architecture’s New Terrain, Published by Lars M ü ller in 2011.

Cynthia Davidson is an architecture editor and critic based in New York City. She is the founding editor of Log: Observations on Architecture and the Contemporary City, a tri-annual journal begun in 2003, as well as editor of the Writing Architecture Series books published by MIT Press. Both publication programs are projects of the Anyone Corporation, a nonprofit, international and interdisciplinary think tank she has directed since 1991. She was the founding editor of the architecture tabloid magazine ANY (1993–2000) and of the “Any” book series documenting ten international “any” conferences (Anyone, Anywhere, Anyway, Anyplace, Anywise, Anybody, Anyhow, Anytime, Anymore and Anything) on the condition of architecture at the end of the millennium. Previously she was editor of Inland Architect, a magazine based in Chicago. A former Loeb Fellow in Advanced Environmental Studies at Harvard’s Graduate School of Design, Ms. Davidson has also written for a number of periodicals, including Architectural Record in New York and Arquitectura Viva in Madrid. She is also director of special projects for Eisenman Architects, which includes responsibility for the firm’s publications and exhibitions.

Peter Eisenman, born in 1932 in Newark, is founder and principal of Eisenman Architects. He is an internationally recognized architect and educator whose award-winning large-scale housing and urban design projects, innovative facilities for educational institutions, and series of inventive private houses attest to a career of excellence in design. In 1967, he founded the Institute for Architecture and Urban Studies (IAUS), an international think tank for architecture in New York, and served as its director until 1982. Among other awards, in 2001 he received the Medal of Honor from the New York Chapter of the American Institute of Architects, and the Smithsonian Institution’s 2001 Cooper-Hewitt National Design Award in Architecture. He was awarded the Golden Lion for Lifetime Achievement at the 2004 Venice Architecture Biennale. Popular Science magazine named Mr. Eisenman one of the top five innovators of 2006 for the University of Phoenix Stadium for the Arizona Cardinals. In May 2010 Mr. Eisenman was honored with the Wolf Foundation Prize in the Arts, awarded in Jerusaleum. Currently the Charles Gwathmey Professor in Practice at the Yale School of Architecture, Mr. Eisenman’s academic career also includes teaching at Cambridge, Princeton, Harvard, Ohio State universities and The Cooper Union.

Eva Franch i Gilabert was born in Catalonia in 1978, and is an architect, founder of the Barcelona based OOAA (office of architectural affairs) and Director of Storefront for Art and Architecture in New York. Franch studied at TU Delft, at ETS Arquitectura Barcelona where she graduated with honors and at Princeton University. Franch   is   a La Caixa fellow and received   the FAD prize for emerging Catalan architects, a Pasajes-iGuzzini prize, a Dragados Foundation prize and she has been a fellow at Schloss Solitude. Franch   has taught at UB as the Peter Reyner Banham Fellow and at Rice University as the Master Thesis Studio Director. Franch’s work has been exhibited at the Center for Architecture NY, Korean Institute of Architects in Daegu, NAI Rotterdam and Shenzen Biennale of Architecture, among others. Franch  has been a visiting critic to schools worldwide and lectured internationally.

Jeffrey Kipnis , born in 1951 in Georgia, is professor of architectural design and theory at the Knowlton School of Architecture of The Ohio State University. His writings on art and architecture have appeared in such publications as Log, Hunch, Harvard Design Magazine,Quaderns, 2G, El Croquis, Art Forum, Assemblage, and his books include Choral Works: The Eisenman-Derrida collaboration, Perfect Acts of Architecture, and The Glass House. As architecture/design curator for the Wexner Center for the Arts, he organized the design survey, “Mood River” with co-curator Annetta Massie, and “Suite Fantastique,” a compilation of four exhibitions: Perfect Acts of Architecture, The Furniture of Scott Burton, The Predator – a collaboration between Greg Lynn and Fabian Marcaccio, and Imaginary Forces – Motion Graphics. His film, A Constructive Madness, produced in collaboration with Tom Ball and Brian Neff, looks at the architect’s work on the unbuilt but seminal Peter Lewis house project.

Sanford Kwinter is Professor of Architectural Theory and Criticism at Harvard University where he co-directs the Master in Design Studies programs. He writes widely on topics in science and philosophy of design. He most recently author of Far From Equilibrium and Requiem: For the City at the End of the Millennium.

Michael Meredith, a long with his partner, Hilary Sample, is a principal of MOS, an internationally recognized architecture practice based in New York. Meredith is an Assistant Professor at Princeton University School of Architecture and previously taught at Harvard University’s Graduate School of Design, the University of Michigan, where he was awarded the Muschenheim Fellowship, and the University of Toronto.

Anna Pla Català graduated at the Architectural Association School of Architecture in London and holds a Master of Science in Advanced Architectural Design from Columbia University of New York. She worked at Foster and Partners in London and Eisenman Architects in New York before setting her own private practice; a Barcelona based architecture office focused on the research and development of models of higher integration between advanced digital technologies and everyday architectural production from its conception to its construction on site. She is current lecturer and guest at a wide variety of international architecture schools and has taught regularly design studios and seminars at the PennDesign-University of Pennsylvania, Berlage Institute, IAAC, UIC, Elisava, Rotterdam Academy_Architecture+Design, Harvard Graduate School of Design_GSD.  She currently occupies the position of Director of Digital Studies of IE_School of Architecture+Design_Madrid.

Bernard Tschumi is an architect who has made a reputation for groundbreaking designs that include the new Acropolis Museum; Le Fresnoy National Studio for the Contemporary Arts; the Vacheron-Constantin Headquarters; The Richard E. Lindner Athletics Center at the University of Cincinnati; and architecture schools in Marne-la-Vallée, France and Miami, Florida, among other projects. Major urban design projects recently executed or in implementation under Tschumi’s leadership include master plans for Mediapolis in Singapore, a new Media Zone in Abu Dhabi, and the Independent Financial Centre of the Americas in the Dominican Republic. Tschumi was awarded France’s Grand Prix National d’Architecture in 1996 as well as numerous awards from the American Institute of Architects and the National Endowment for the Arts. He is an international fellow of the Royal Institute of British Architects in England and a member of the Collège International de Philosophie and the Académie d’Architecture in France, where he has been the recipient of distinguished honors that include the rank of Officer in both the Légion d’Honneur and the Ordre des Arts et des Lettres. He is a member of the College of Fellows of the American Institute of Architects.

Alejandro Zaera Polo is a contemporary architect and founder of London and Barcelona based AZPA. His work has consistently merged the practice of architecture with theoretical practice, providing a strong intellectual rigor to the practice and the discourse on architecture. He trained at the Escuela Técnica Superior de Arquitectura de Madrid, graduating with Honors, and holds a MARCH II from the Graduate School of Design, Harvard University, with Distinction. He worked at OMA in Rotterdam between 1991 and 1993, prior to establishing Foreign Office Architects, which run until its dissolution in 2011. He now runs AZPA, which integrates architecture, urban design and landscape architecture, working both for the public and private sector on an international scale. He is currently Visiting Professor at Princeton SOA and the Norman Foster professor at Yale SOA. He was Dean of the Berlage Institute in Rotterdam from 2000-2005 and held the Delft University Berlage Chair. He has also been Visiting Critic at Columbia GSAPP, Princeton SOA, UCLA School of Architecture and Yokohama University and he led a Diploma Unit at the Architectural Association in London. In addition to his professional role as an architect and an educator, Alejandro Zaera-Polo is a theorist and a thinker with a capacity to identify social, economical, technological and political trends and translate them into the architectural discourse. His texts can be found in many professional publications such as El Croquis, Quaderns, Log, A+U, Arch+, Harvard Design Magazine, Archis, and Volume, among many others.